Freedom is the theme of this Saturday's episode of TERE MERE BEACH MEIN. Hosted by Farah Khan, the celebrity guests are Neil Nitin Mukesh and Abhay Deol. To air on Saturday, October 3 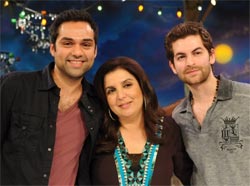 Featured Video
at 9 pm, the episode highlights the fact that these actors lived within the rules laid by their family and yet took career decisions that may have resulted in a lot of flak for their families.

The handsome and charming Neil Nitin Mukesh recalls how he had made his father mad at him by signing Johnny Gaddar as his debut film. The negative role in it made his father upset.

Neil says that he hates interference and says, "My dad did not speak to me for six months because I signed Johnny Gaddar. He was so mad at me that he wouldn't even speak to me when eating meals. On asking him what was upsetting him, he said that you're Mukesh grandchild and we're known for our goodness so how could I sign up for a negative role in my debut film. I explained to him that it was necessary for people to recognize my acting abilities and that's why I'm doing the film. I can identify myself as an actor, make people identify with me as an actor. It was a big thing after the film released."

He adds, "I wonder if any son has got such a wonderful gift from his father like I did. Dad said that he respects me and is proud that I did the film"

Farah asks if he ever wanted to follow the family tradition of becoming a singer and he reverts, "Each individual has different interests. I can sing." He regales the audience with his rendition of his grandfather's song, 'Ek din beet jayega maati ke mol'!

Watch this and more on Neil Nitin Mukesh & Abhay Deol this Saturday, Oct 3 on Tere Mere Beach Mein, at 9 pm, only on STAR Plus.