This new year BollyCurry brings back the spotlight on much loved onscreen and off-screen couples of Bollywood. The leading couples are an integral part of any film and the fraternity itself. More or less, they are the much needed x-factor that help make a movie successful with critics and 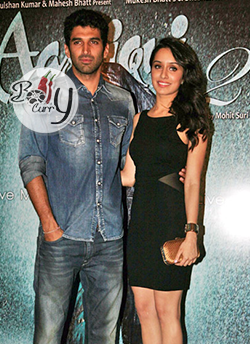 audiences alike. Hence, this week, caught under the radar is a couple who made many go gaga over their breathtaking chemistry. Yes! We are talking about the dashing Aditya Roy Kapur and the beautiful Shraddha Kapoor.


Aditya Roy Kapur, the younger brother of Siddharth Roy Kapur, the CEO of UTV Motion Pictures, debuted back in 2009 with Vipul Shah's London Dreams. But it wasn't until last year that he rose to fame with Aashiqui 2, a Mohit Suri directorial. Likewise, another recent debutante Shraddha Kapoor also belongs to the film fraternity through her father Shakti Kapoor, and shot to stardom with the same film, Aashiqui 2.
Aashiqui 2 is about the journey of Rahul (Aditya), an established singer on a downward spiral due to his alcohol addiction and Arohi (Shraddha), an amateur singer who he takes under his wing and catapults to fame. The movie follows the two characters through their turbulent relationship, with Rahul's struggles with anger and alcohol affecting their every move.
The film received mixed reviews from the critics, but was declared a blockbuster at the Box Office. It's commercial success is credited to the performances, music and, most importantly, the intense and heart-wrenching chemistry shared by the leads. Not only did Aashiqui 2 become a blockbuster success and part of the 100 Crore Club, it has also received many nominations at various prestigious award ceremonies.  So far, this year has seen the Screen Awards, the Star Guild Awards and the Big Star Entertainment Awards, and the couple have won the best couple award at all three for their impeccable performances and chemistry in the movie.
Not only did they make a wonderful reel couple in Aashiqui 2, but it is rumored that they may be a couple in real life as well. Speculations of their relationship date all the way back to the middle of 2013, but both still maintain that they are just "good friends" despite being seen together at numerous events. Maybe they will finally spill the beans on their relationship status in the upcoming episode of the extremely popular talk show Koffee with Karan!
BollyCurry wishes these rising stars all the best for their future, both personal and professional. Till next time!