Mumbai, April 1 (IANS) Shaana Diaa, who will be seen in filmmaker Ravi Chopra's forthcoming 'Bhoothnath' which also has Amitabh Bachchan in a pivotal role, says that she wants to play controversial parts.

'I would love to do a controversial role... characters and issues about which people don't like to sit and talk,' Shaana told IANS. 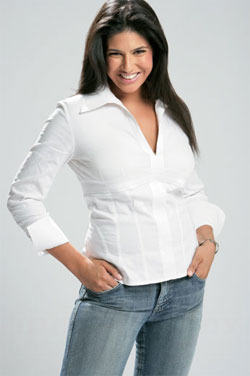 Featured Video
Rukh Khan and Priyanshu Chaterjee. It revolves around friendship between a young boy and a ghost.

Shaana, who is half Gujarati and half Swiss, is playing Priyanshu's NRI wife and is on cloud nine as she is sharing the silver screen with the Big B.

She said: 'Working with Amitabhji was like a dream come true. I am a newcomer, but it was wonderful to see how effortlessly he made me feel comfortable.

'It is a great opportunity of my life. He is an actor of such high calibre and even if I do awfully in the film, it would be balanced and forgiven by audiences. And if I perform well, it would stand out since I am cast opposite a great star. Both ways it would benefit me,' said the actress.

Shaana had earlier played the role of Laila in Vipul Amrutlal's 'Namastey London', which had Akshay Kumar and Katrina Kaif in the main lead.

Commenting upon the choice of projects, she said: 'I am a firm believer in picking up substantial roles.

'For me Bollywood is not only about 'masala' films. With so many international production companies joining hands with the Hindi filmmakers, it is making waves internationally.'

Speaking about her problem with Hindi, she admitted: 'Hindi is not my mother tongue and I do have a problem with the language. However, being an actor it is my job to learn it to perfection and over a period of time I would do that.'

Apart from 'Bhootnath', Shaana has 'Idol' (working title) in her kitty and says she will soon start shooting for it. Reluctant to divulge further details, she said she would slip into the character of a journalist in the movie.