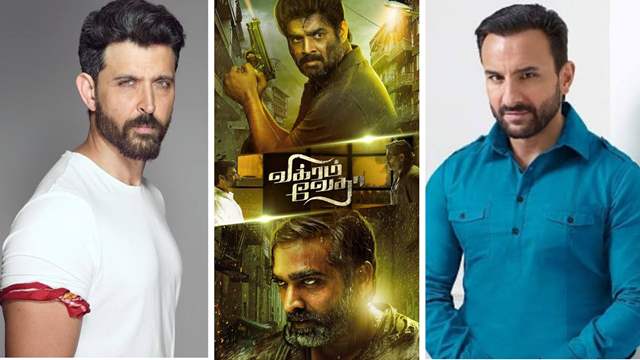 After much speculation, it is now confirmed news that the mighty duo Hrithik Roshan and Saif Ali Khan will be seen in the Hindi remake of the Tamil hit film Vikram Vedha.

On Saturday, Taran Adarsh took to Twitter to make the big announcement and even shared the release date of the film. He wrote:

"HRITHIK - SAIF IN 'VIKRAM VEDHA' REMAKE... #HrithikRoshan and #SaifAliKhan will star in the #Hindi remake of #Tamil film #VikramVedha... Pushkar-Gayathri - the director duo of the original film - will direct the #Hindi version too... 30 Sept 2022 release."

The title of the adaptation is yet to be locked and it will be helmed by the original director duo of Pushkar and Gayathri. As soon as the big news was out, fans started trending 'Vikram Vedha' on Twitter, which indicates the excitement among fans.

Hrithik will be playing a dreaded gangster in the thriller film and has already started the prep for his character, whereas Saif is excited to be playing an idealistic cop in this action thriller.