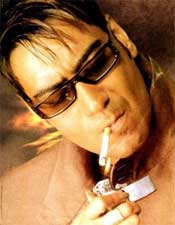 'We have submitted a written complaint at the offices of senior superintendent of police and director of health services, Chandigarh. They have assured us of appropriate action against the the actor after probe,' Hemant Goswamy, chairperson of Burning Brain Society, told IANS.

Devgun, who had come to Chandigarh Monday for the shooting of a Bollywood film, was clicked by a photo journalist while smoking at the Chandigarh airport.

The city became the first smoke-free city of India as it was officially declared so July 15, 2007. Smoking is banned at all the public places as well as any place where the public has any access.