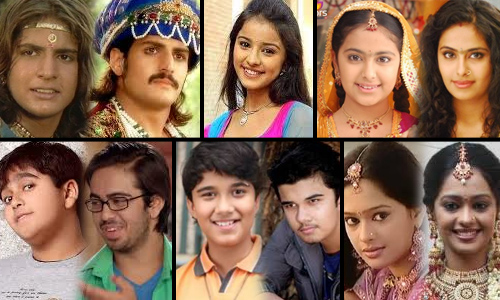 As Children's Day is round the corner, our TV actors who started their careers on TV as child actors are now seen essaying the grown up roles. We feature these actors and list down the shows which gave them the fame and recognition.

Colors' cult show Balika Vadhu gave Avika Gor immense fame and recognition so much so that now she is playing the matured role of Roli who is the dutiful and obedient daughter in law of the Bharadwaj family. Sasural... being her second popular show, she is yet again loved and appreciated by the masses for her exceptional skills.

Young warrior Prithviraj portrayed by Rajat Tokas who again essays the role of valiant Mughal emperor Akbar is loved for his acting skills. He plays the role of an esteemed emperor perfectly on screen.

Avinash Mukherjee rose to fame with a popular show Balika Vadhu and has improved a lot as an actor. He portrayed the character of the youngest son in Colors' Sanskaar - Dharohar Apnon Ki. After polishing his skills a bit he will be seen in Sony TV's Itna Karo Na Mujhe Pyaar in a matured role.

Mahima has been acting at a very tender age and is gaining popularity for her Rachna's character in Sapne Suhane Ladakpan Ke.

Mughda Chapeker started working at the age of five as a child actor. She got a lot of popularity with the show Prithviraj Chauhan as Sanyogita. She has been essaying grown up roles in shows like Mere Ghar Aayi Ek Nanhi Pari and now will be seen in Satrangi Sasural.

Aman Sharma entered the industry as a child actor from the show Aise Karona Naa Vidaa as Bholu. He is playing a long term role in Yeh Rishta Kya Kehlata Hai where he was seen as a kid and now essaying the role of a grown up boy in the same show.

+ 2
6 years ago
RAJAT'S ABILITY TO GET INTO THE SKIN OF THE CHARACTER, THE LAYERS & SHADES HE BROUGHT TO THE CHARACTER...

I CANT IMAGINE ANY ONE ELSE WHO COULD DO JUSTICE TO JALAL WITH SUCH GREAT CONVICTION.

EAST OR WEST,
RAJAT IS THE BEST !

+ 5
6 years ago Awww both Rajat and MUgdha are on the list. I might not love them as much as I used to now,but PRC will always be cherished &lt;3

6 years ago Avika Gor you were great as anandi, and i love you as roli!

+ 4
6 years ago rajat tokas u always set the screens on fire, whether its as PRC, veer, robi or now as akbar.