This month, caught under the spotlight, we have an uprising belle who has rapidly accumulated well deserved attention and love from millions of hearts worldwide. Shraddha Kapoor, daughter of a well known Bollywood villain for over three decades, Shakti Kapoor, and his wife Shivangi Kolhapuri. 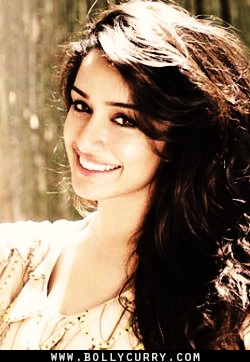 Born on March 3rd, 1987, Kapoor was raised in Mumbai in a mixed cultured family of Punjabi and Marathi. She completed her schooling at Jamnabai Narsee School and then later registered herself at the American School of Bombay. While studying, she is known to have remain active by playing sports such as soccer and handball. After finishing her studies there, she moved to Boston, USA, but shortly returned home after being recognized and casted in her debut film, Teen Patti, by its producer Ambika Hinduja.
The movie became Kapoor's officially entry into Bollywood and garnered her a volume of positive reviews from the critics. Even with it being her first movie, she stood out from the cast including Amitabh Bachchan, Ben Kingsley and R. Madhavan. Though the film didn't do too well at the Box Office, she was nominated for Best Debutante at the Filmfare Awards that same year. As is the norm, the petite lass then went onto sign a three films deal with Yash Raj Films.
Kapoor's next screen adventure came in the form of the teen comedy Love Ka The End with Taaha Shah. Again, the film performed below average at the Box Office but that didn't stop critics from praising Kapoor's acting capability. The film also won her the Best Actress award at the Stardust Award ceremony. Being under her contract with Yash Raj for three films, she was then offered a lead role in Aurangzeb but Kapoor refused the offer and signed Mahesh Bhatt's Aashiqui 2, which subsequently canceled her contract with Yash Raj. The musical love story with its chartbuster songs was declared a blockbuster at the Box Office, bringing the doe-eyed actress stupendous fame and popularity worldwide. The same year, she did a guest appearance in the Imran Khan and Kareena Kapoor Khan starrer Gori Tere Pyaar Mein.
In addition to her acting career, Kapoor is involved with many charitable organizations. A few of her major ventures apart from Bollywood are her ramp walks during the Lakme Fashion Week and India International Jewelry Week. In 2013, she also performed at a fundraiser held by STAR India. This in-demand beauty is also a brand ambassador of several products including Lakme, Wella, Vaseline, Gitanjali and Titan.
Did You Know?
Kapoor's lineup for the coming year includes Mohit Suri's Ek Villian with Siddhart Malhotra and Riteish Deshmukh set to release on 27th June, a Vishal Bhardwaj directorial named Haider starring Shahid Kapoor, Tabu and Irrfan Khan, followed by Ungli  - a language comedy drama directed by Rensil D'Silva.
Here's hoping her future projects bring her the success and adulation that she deserves. BollyCurry wishes Shraddha Kapoor all the very best.
Author: Komal P.
Editors: Fariha L. and Jenifer Y.
Graphics: Shikha A. and Komal P.
Do you have a comment or suggestion for BollyCurry? Drop us a PM at BC_Dropbox today!