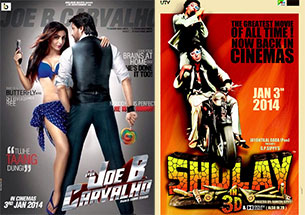 The New Year will have two very different films hitting the box office. This Friday viewers will have a choice between the 3D version of 1975 action drama "Sholay" and Arshad Warsi starrer comedy film "Mr. Joe B. Carvalho".

The 3D version of the Amitabh Bachchan-Dharmendra starrer "Sholay" has been a much awaited film as the original is still watched and loved. Produced by Sascha Sippy, grandson of G.P. Sippy who had financed the original, the new one promises to provide an entirely new viewing experience to the audience when it hits 1,000 screens.

While the original "Sholay" was reportedly made on a Rs.4 crore budget, the revised version has been made on a budget of about Rs.22 crore which includes restoration and conversion cost.

It took three years to convert the film into 3D.

Not only is the film special, but so was the process of releasing it.

The trailer launch was a historical moment when celebrated Bollywood scriptwriters Salim Khan and Javed Akhtar came together after decades. The duo wrote commercially successful films like "Zanjeer" and "Deewaar" before parting ways about 32 years ago.

For those who are looking to tickle their funny bone this weekend, comedy film "Mr. Joe B. Carvalho" might be a good option. Produced by Bhola Ram Malviya and Shital Malviya and directed by Samir Tiwari, the film features Soha Ali Khan, Arshad and Javed Jaffrey.

The film is expected to go through interesting twists and turns when Arshad as detective Joe B. Carvalho gets entangled in a comedy of errors while solving cases with his assistant Shantipriya played by Soha.

Soha will be seen in an action avatar - she dons khakee uniform and beats up goons in the movie. She will also be seen as a cabaret dancer and in a bikini in the fun filled drama.