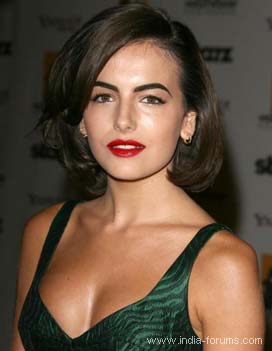 New Delhi, Sep 29  Hollywood actress Camilla Belle might be just one film old in Bollywood, but she is madly in love with the industry and is keen to do typical song-dance masala Hindi movies.

The 24-year-old, who featured in Hollywood movies 'The Lost World: Jurassic Park', 'When a Stranger Calls' and '10,000 BC', made her Indian debut with Akshay Kumar's co-production 'Speedy Singhs'.

'If I am offered a film here, I would grab the opportunity. I am completely open to it, I don't limit myself. I don't close my mind to anything. I love the way films are made here. I am so fond of song-dance sequences. There (west) it is not so colourful and rich like here in India,' Camilla told IANS in an interview while promoting the film in the capital.

'I got an opportunity to try 'jhatka-matka' of Bollywood and I must say it was so much fun. I took Bollywood dance class in Los Angeles, it has become very popular there. I haven't danced in my whole life because we don't have these song and dance sequences there. But honestly, one can say I am infected by this Bollywood fever now, it's all over my mind,' she added.

Though she is fascinated with Bollywood, she knows little about it.

'I want to see more of Bollywood films now. I want to learn the format that is followed here that is why I am taking back a lot of DVDs of various Hindi films,' said the Los Angeles-based actress

Talking about her favourites in Bollywood, she said: 'I know Aishwarya as I met her at the Cannes and she has been there (LA) quite a few times. I have also seen a couple of her films. I think she is very beautiful and charming.

'Some time back I saw 'Dhoom 2' and I just loved it. I love Hrithik Roshan. He is an amazing actor. I have shown his videos to all my friends and I have fallen in love with him,' she added.

Camilla, who visited India for the first time to promote 'Speedy Singhs', also wants to learn about Indian culture.

'It's been a real learning experience specially because Indian culture is something I have not been exposed to before. But being in India and working with an Indian cast has made me feel closer to the country,' she said.

The actress, who has just wrapped up filming 'Open Road', a Brazilian-American co-production, feels 'the entertainment industry has become very global. You see something like 'Slumdog Millionaire' winning an Oscar. The give and take of actors, producers, has made the whole scenario very global'.

'Anybody from any country can make it big in any of the two industries (Bollywood and Hollywood) now. This is a very beautiful change where the difference are being dissolved so maturely,' she added.