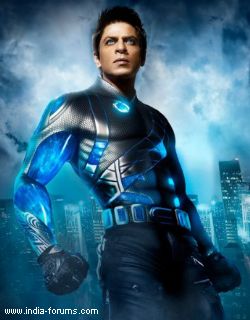 Mumbai, Oct 8 After getting Rajinikanth on board for a cameo in his mega-budget project 'Ra.One', Shah Rukh Khan has managed to rope in megastar Amitabh Bachchan for a voiceover to introduce a game based on the superhero flick.

Amitabh, known for his distinct baritone, drove down Thursday morning to do a voiceover for the movie. He left Oscar-winning sound designer Resul Pookutty amazed by his skill and dexterity.

'He came and finished his work in no time. We wanted him to introduce the game 'RA.One' in the film in his voice. His presence has changed the whole film. I wanted to have Amitji involved in our film somehow. Now the introduction of the game is in his voice. This is the best way I could bring Amitji into the project,' said Pookutty.

Big B has earlier been involved with Shah Rukh's production house when he did a cameo in 'Paheli'. The two also featured together in 'Mohabbatein', 'Kabhi Khushi Kabhie Gham' and 'Kabhi Alvida Naa Kehna'.