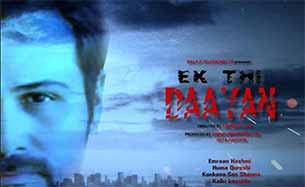 Filmmaker Vishal Bharadwaj, co-producer of supernatural thriller 'Ek Thi Daayan' with Ekta Kapoor, says the film is not gory and hopes the censor board doesn't award it an adult certificate.

"We are expecting U/A-certificate because children have played a big role in the film. Kids are the hero in the film. The child-artist, who has played the role of younger Emraan, has a very big role," said the 47-year-old here in an interview.

"And children will enjoy the film a lot as this story has been taken from our folklore and it's not at all gory," he added.

Meanwhile, Bhardwaj who has also written the screenplay for "Ek Thi Daayan", based on actress Konkona's father Mukul Sharma's story, would love to welcome good writers in the industry.

"I feel there is a dearth of good writers in our industry and when a few of them come, they turn directors. And again there are no directors. So I feel it would be good to have more and more directors in the industry," he said.

"And we don't respect our writers, so I feel it would be very good to have more writers so that we have better films," said the filmmaker, who is known for his writing skills as well.

Known for directing films like "Maqbool" and "Omakar", loosely based on Shakespeare's "Macbeth" and "Othello" respectively, Bhardwaj had co-wrote the screenplay of both the critically acclaimed movies.