View Profile
2005 Miss India contestant Kaveri Jha has every right to be proud of her god-gifted beauty. After doing a lot of photo shoots with top photographers in the industry like Jagdish Maoli, Ishraar Qureshi, and Dabbo Ratnani the 21-year-old 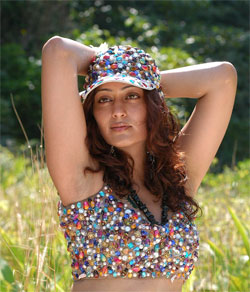 Kaveri is one of those few chicks who posses beauty with brains. The model-turned actress is presently doing her Psychology along with commerce and ancient Indian culture.

Kaveri has already made a name for herself in Tollywood after making a debut in Telugu film Nagaram starring opposite well-known south actor Srikanth. And now the sexy model is all set to show her jalwa and latka-jhatkas in Bollywood. Even before her first movie hit the movieplexes, Kaveri’s beauty has managed many ooing Bollywood producers and she has bagged a role in Hindi flick Hijack opposite Shiney Ahuja.

Critics have already declared that Kaveri Jha is going to prove a tough competition for the other established beau ideals of Bollywood.

Surely, Rani Mukherjee and Aishwarya Bachchan have something to worry about while this glam girl will soon set our nearest multiplexes on fire. Goss, what will happen to other Bolly-babes!