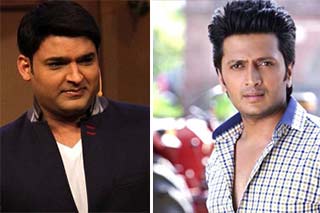 "Loved the script. Loved the character. Loved the team," Riteish, who is riding high on the success of "Ek Villain", said in a statement.

"I've always liked to push the envelope with the choices I make. This film allows me to potentially rip it apart. Watch out there's a new Bank-Chor in town," added the actor.

"From villainy to action in his upcoming 'Lai Bhaari', there's nothing he can't do! And with 'Bank-Chor', Riteish is in a zone that's a serious strength - comedy! He adds the scale, madness and weight that the project deserves," said Patil.

The audiences are in for one hell of a ride, he added.

A comic-caper, "Bank-Chor" is about three morons trying to rob a bank. They choose the worst day possible for the heist and get caught in the crossfire of cops, industrialists and corrupt political leaders.

Patil is producing "Bank-Chor" and Bumpy is directing it. They will start shooting immediately as the plan is to release it in early 2015.