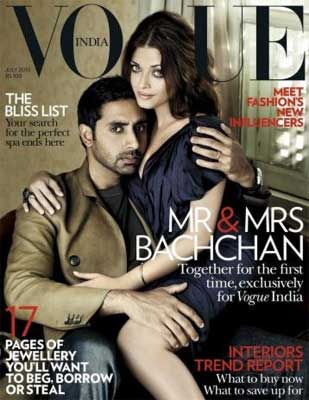 It's a first for the young Bachchan couple as they grace the covers of Vogue!


After some classy shots in the elaborate setting of Istanbul, Aishwariya Rai Bachchan and Abhishek Bachchan have given a green signal for the Vogue India cover shots that will appear in the July issue of the magazine.


The charismatic couple have given an intimate shot with trendy Ash in a short dress seated in the laps of Abhi Jr., who goes casual with a brown jacket, t-shirt and jeans.  Despite starring in numerous movies together, giving glitterati individual shots for the covers of many a prestigious magazines world wide, even being invited to the Oprah Winfrey show together, this will mark their first time appearing in a magazine as a couple.  That, a magazine like Vogue!


But whilst all this hype promises this to be an exciting (and exclusive) read for all Bachchan fans, let's hope it'll be successful in diverting the audiences' disappointment met from their unimpressive latest release, Raavan.