A crazy fan can do the most amazing things that others find rather surprising. That's what yet another Kishore Kumar fan did recently to pay his heartfelt tribute to the legendary singer. We are talking about none other than Amit Paul, the finalist of Indian Idol 3, who had a humble request—that he should be given an opportunity to enter as a Challenger on the popular show K for Kishore on Sony Entertainment Television. For Amit this is the best way he can contribute in memory of his "God Kishore Kumar". 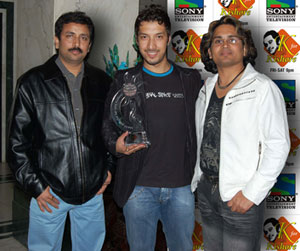 Featured Video
Amit Paul, who has had the entire nation backing him and has seen the mass frenzy created by loyal fans, strongly felt the need to be a part of the show. He defied everyone who tried to talk him out of the competition and took part as a Challenger (entry thro' any one gateway—Tata Indicom, Radio Mirchi & IBN 7) in Sony Entertainment Television's unique concept and popular show K for Kishore. At the concert in Indore he joined the other 2 Challengers and sang to a crowd of over 2000 people who cheered him all through the performance. What came, as a surprise to the judges was Amit Paul's passionate singing of Kishoreda's songs and the tremendous courage he showed by entering as one of the Challengers. His flawless singing of Kishoreda's songs got him the Music Company Sa Re Ga Ma trophy for Mach Gaya Shor, Har Taraf Kishore award at Indore. Chetan Rana, one of the participants on the show, shared the award with him.
It is interesting to note that the entry of the Challengers is only making the completion tougher and reaffirming the increasing Kishore Kumar fan following and their keenness to be a part of K for Kishore. The other 2 Challengers in Indore were K Shailendra from Jhansi, a die-hard Kishoreda fan and a professional singer himself; and Naveen Srivastava, an exporter from Motihari, Bihar, whose knowledge in music comes from his parents who sing folk songs. However, for Shailendra & Naveen singing became a passion and they soon followed their heart putting their personal desires on hold (Shailendra left his MBA half way) to pursue singing. Incidentally, both started their careers in singing with Kishore Kumar songs and till date they remain his truly…
K for Kishore has recreated the magic of the legend Kishore Kumar. Kishore Kumar is irreplaceable and continues to inspire generations of singers, performers and music lovers. The concerts in memory of the legendary singer-- Machh Gaya Shor, Har Taraf Kishore, (entry with passes only) held in Kolkata and Indore on two consecutive weekends received overwhelming response with over 2000 Kishoreda fans attending the concert. With eminent judges like popular music director & singer Bappi Lahiri who knew Kishoreda as a friend and musician, singer Sudesh Bhonsale, who completed all Kishoreda's incomplete film songs after his death and his son Amit Kumar and hosts Babul Supriyo, a die-hard Kishore Kumar fan & Rageshwari Sachdev, this show has become a rage among music lovers across the country in a short span of its launch.
Relive the life and times of Kishore Kumar In K for Kishore only on Sony Entertainment Television

14 years ago The idea of Challenger is not a good one for any show... Its never fair to the existing contestants...

I love Amit Paul's singing, but just because of that, I wont want to see him in this poorly crafted show anyways...

+ 3
14 years ago I thought they wouldnt allow it since he got so far in Indian Idol and was runner up? :)

I'm so so happy to see Amit singing again... but how does the format of this show go? people can keep coming, so will there never be a 'winner'?

14 years ago wow first he came as guest and now as challenger. hmm..I think that might be good help for the show because he's really popular.

14 years ago awww i miss amit!! he is really good at it

14 years ago wow! what's funny is, when sony started airing k for kishore i thought the show was ideal for amit and he should've been on it. now we'll get to see him on the show :D