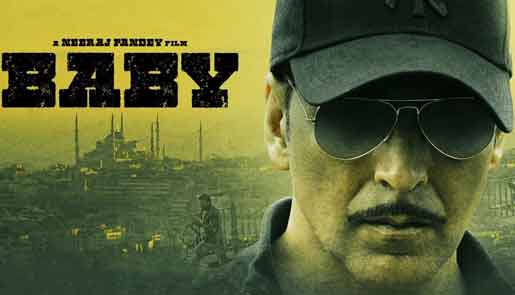 Akshay Kumar, who has featured in comic roles in films like "Entertainment" and "The Shaukeens", will not appear "humourless" in his forthcoming film "BABY", which is on terrorism. The film's director Neeraj Pandey says there's more than seriousness to the actor's character.

How serious is his character in "Baby"?

"I wouldn't say he is completely humourless in 'BABY'. His character has its funny moments. He doesn't wear a frown forever. But he is extremely serious about his work. Akshay according to me is way better in 'BABY' than in my earlier film 'Special 26'," Pandey said.

From action, comedy and romantic roles -- Akshay has done it all in his film career, but haven't comedies been in abundance in his filmography?

Pandey said: "Who am I to comment? He has the experience of (over) 130 films behind him, whereas I have only three films. I feel lucky to be able to make the films that I want to make with the actors I want."

"BABY" also stars actors Rana Daggubati and Tapsee Pannu, who were chosen from the five to six actors that the film's crew had shortlisted.

"Rana was top of the list. We needed someone who looked athletic and strong and could run alongside Akshay Kumar. As for Taapsee, she will surprise audiences. The same goes for my music composer M.M. Kreem.

"I worked with him in 'Special 26'. Kreem's songs are very melodious. I look up to him and I learn a lot from him. He can summon his talents at will," he said.

Pandey's next film is on cricketer Mahendra Singh Dhoni, and stars Sushant Singh Rajput. One wonders if it will be a bigger film than "BABY".

"The budget will depend on the canvas. The content excites me, not the budget. In 'Baby', the scale is big because the plot demanded it," he said.