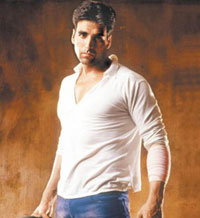 Featured Video
their career where the film is directed but when it comes to distribution there are no buyers for his films.


The reason behind is assumed that Akshay's last flick 'Chandni Chowk to China' didn't fared well and so the takers are apprehensive about his psychological thriller 'Tasveer.'


Looks like Akshay's 2008 super-hit 'Singhh Is King' charm has faded away with 2009 debacle 'Chandni Chowk to China.' Hope for the best for Akshay as there are other films too in his kitty comprising of 'Blue', 'Kambakht Ishq'  'Houseful' and 'Patiala House