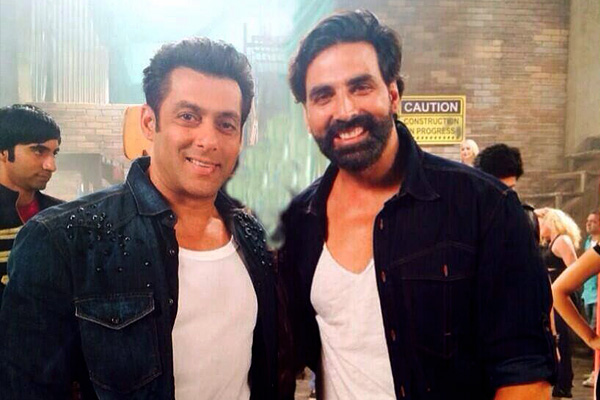 Big Boss is all set to go on air in October and the guess game for the contestants are going on!

Our little buzzing bee gives us the news that the makers of the show have decided to have two hosts this time! And who else can compliment Salman Khan better other than Akshay Kumar! We have seen the duo sharing space in Mujhse Shaadi Karogi!

The tagline Double Trouble' is not only limited to the contestants, but will be followed by the hosts also!

Where Akshay's entry in BB9 will mark his return to Colors after hosting Fear Factor - Khatron Ke Khiladi, reports says that Akshay will not  be accompanying Salman all the time on the show. And in the absence of Akshay, Salman will co-host with other celebrities. Ranveer Singh might be one of them!

Colors will launch Big Boss 9 Double Trouble on 28th of September! And it will go on air from 11th of October!

5 years ago I dont want the timings of bigg boss be 10.30. Its late and I wont be able to watch it. The time slot of 9 was perfect and I think it can fetch goodTRP's also

5 years ago This sounds very interesting to have Akshay Kumar with Salman Khan.

+ 4
5 years ago Ranveer & Akshay together would be awesome.