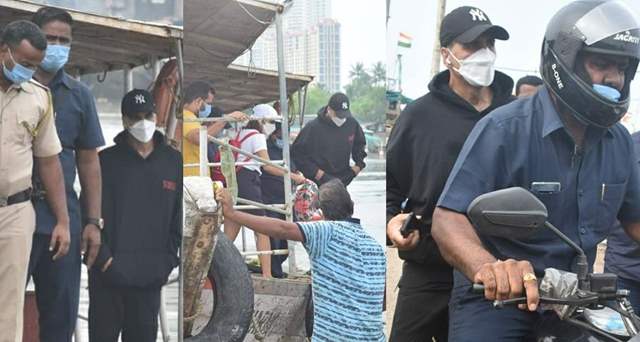 Akshay Kumar is back to his busy schedule. The actor recently returned from his foreign schedule of Bell Bottom and it seems he has already dived into his next project. The actor was recently spotted at Madh island taking a bike ride and a jetty ride. The Sooryavanshi actor ditched his fancy car to cut on time to reach work.

Akshay Kumar, as usual, was dressed in casuals - a black sweatshirt, black denim and sinkers. Keeping in mind the pandemic, Akshay Kumar was also sporting a face mask.The pictures of the actor stepping out of the ferry and taking a bike ride are all over the internet. Reportedly, Akshay is now shooting for a film with Miss World Manushi Chhillar.

Sanjay Dutt is also a part of it. We must say, Khiladi Kumar even in his 50s is as dedicated and hardworking as he was before. He is disciplined and his enthusiasm can give any young actor a run for his money.

Meanwhile, Akshay is looking forward to the release of his film Laxmmi Bomb along with Kiara Advani. The film is set to release on Disney+ Hotstar on Diwali. In the film, Akshay essays the character of a man who is possessed by the spirit of a transgender woman. The trailer of the film was recently released and it received accolades from all corners. First song of the film titled Burj Khalifa also entertained the masses.