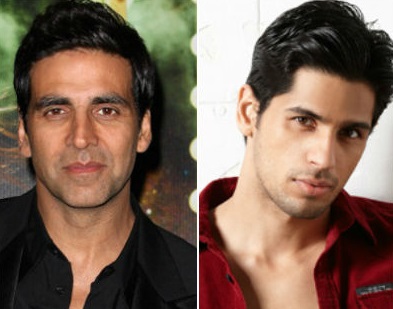 Akshay Kumar can't stop praising his 'Brother', Sidharth Malhotra. The two actors who are playing brothers in Dharma's upcoming film have apparently bonded on the sets and Khiladi Kumar has often been heard saying how he likes the younger actor because he reminds him of the way he was at that age.

We hear, these two fitness enthusiasts bonded over more than just that and were seen sharing a fantastic equation even off the sets. Akshay said, "Sid reminds me of myself at that age. There's his interest in fitness... I was like that, very engrossed in building the right physique. Also, he is very punctual which I have always felt is important. He is also focused and hard-working. When I speak to him, he reminds me of how I was."

When asked about the Punjabi connection the two share, he said, "No. It has nothing to do with the fact that he is Punjabi. I have met many other Punjabi actors and not felt that way. Sidharth is different."

Sidharth Malhotra on the other hand was quick to add, "I've learnt so much from him. He's very helpful as a co-star and a dream to work with. He didn't act like a senior at all and treated me like one of his contemporaries. Even during scenes, he would help me improvise. I really have a lot of respect for him."

Touted to release on the big independence weekend, Brothers will see one of the biggest releases this year. Directed by Karan Malhotra and produced by Karan Johar, Hiroo Yash Johar and Endemol India, the film is presented by Dharma Productions, Lionsgate, and Endemol India.

With so many things being said about these two, we can't wait to see these two on screen in Brothers!