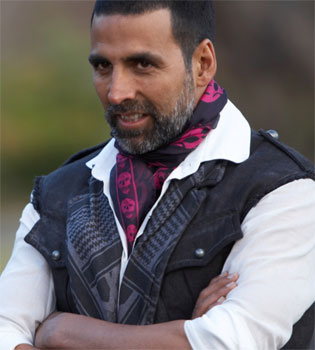 Forget the red carpet tuxedo and bow tie, Akshay’s winning look is all about living life by your own rules! The look is a perfect synergy of his bold personality and his role as anchor of the new reality show with death-defying stunts.

Commenting on his new avatar, Akshay Kumar said– “I wanted to show all my COLORS through my new style, Akshay’s personal style… I don’t want to look like someone else to be cool; What you see is what I am; from laughs to tears, to dangerous stuff, ladies and cheetah…It’s just me, myself and all my scarves”

Fear Factor – IDEA Khatron Ke Khiladi’ takes the game to the highest level of physical and mental challenge, making it more gritty and edgy than ever before. Another attraction of ‘FEAR FACTOR – Idea Khatron ke Khiladi’ is going to be the 13 Bollywood beauties that it will be bringing together, who’ll compete with each other, to be the last-one-standing. Yaana Gupta, Aditi Govtrikar, Pooja Bedi, Sonali Kulkarni, Anita Hasnandani, Meghna Naidu, Tapur Chatterjee, Tupur Chatterjee, Nethra Raghuraman, Anjana Sukhani, Dipannita Sharma, Vidya Malvade and Urvashi Sharma. The show will be shot entirely in South Africa, over a period of one month and is being produced by Endemol India, one of the finest production houses in India.

14 years ago Love Akshay!The beard thing doesn't look good on him though. But I still love him - he is my favorite actor.

14 years ago I love Akhshay!!! But here he doesnt look nice!!!! And I knw that he is growing old!! But, thats a part of life!! And I still thnk he is a wckd actr!!! One of the best!!!! The beard does make him look old!! He doesnt look nice with the stubble, especially when its grey!!! I also think that he should grow his hair a bit!! It will look nicer!! like he has in Humko Dewana Kargaye!!! He looks really nice in there!!! But I suoppose he needs it for his film!! Atleast he hasnt got a hairstyle like SRK and Salman Khan!!!! Its long!! Gys are not suppsed to hv long hair!!! Thnx Anyway!!!

14 years ago This look just took ugliness to a whole new level.

+ 5
14 years ago oh wow. and that wow would be at the bollywood beauties competition :O

14 years ago I THOT IT WAS GUNNA COME ONE SONY :d

14 years ago he need to get rid of that bear. some of it grey hait and some of it black so just get reid of it. you lokk great w/o it. He is a great actor. I love his movies. will def. watch his show.