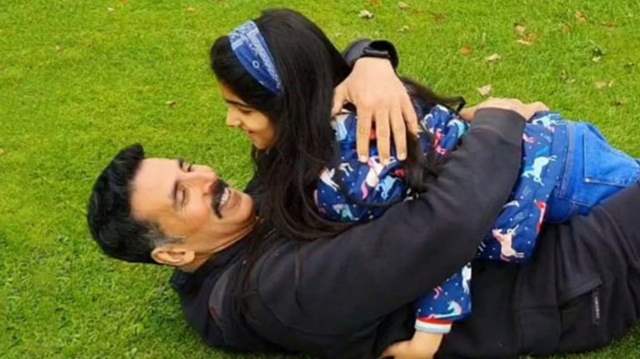 Akshay Kumar has always been a family man. Be it spending quality time with his wife or kids or going all out to express his feelings for them, the actor leaves no stone unturned.
The Aitraaz actor have always been a doting father to both his kids and he proved it once again. The actor took to his social media handle and shared about his feeling, wining for his daughters as they enjoyed a day at the amusement park.

Akshay shared a video wherein he can be seen walking with his daughter carrying a huge soft toy on his head. His daughter Nitara could also be seen clutching on to another soft toy. Along with the post Akshay penned a touching note that read, "Took my daughter to an amusement park yesterday. Looking at her happy smile on winning not one but two stuffed toys for her was hands down the closest I’ve felt to being a hero. #BestDayEver".

For the unversed, Akshay Kumar and Twinkle Khanna tied the knot on 17th January 2001. They are parents to a son and daughter and have been quite protective about the two.

Earlier, Twinkle Khanna had also penned a heartfelt note for their son Aarav on his birthday, as he turned 20, She wrote, "And he turns 20! It’s hard enough raising them, but it’s harder to finally let go. The problem is we create each block of their being. Pile it together in a structure we see fit when they are little. We do this year after year, and get so used to it that we forget that those blocks finally belong to them. It’s been hard to step back but I am so proud of what this wonderful boy is building with his blocks. Happy Birthday Aarav!".

Meanwhile, on the professional front, Akshay Kumar has a boatload of projects in his kitty. He will next be seen in 'Ram Setu' which is slated to hit big screens around Diwali. He also has 'OMG 2' and 'Capsule Gill' in the works.