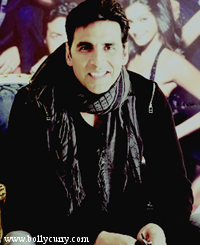 is upcoming romantic comedy, Thank You, in London.


The superstar donned the role of an 'extramarital affairs counselor' at the meet, and was seen modestly discussing relationships, marriages and infidelity issues in good humor, with the attending media.

The press conference, which was attended by the cast of 'Thank You' and young couples and singletons alike, provided an exclusive opportunity for the audience to shed light on their views on marriages and commitments in today's age with the Khiladi of Bollywood himself. Akshay went ahead to give insightful tips to maintain long lasting relationships and how to preserve the 'magic' in marriage.
The press conference turned out to be a successful venture and the first of its kind, with fans of the actor getting an opportunity to witness Akki in all his element.
'Thank You', is a rom-com which revolves around the philandering ways of men where marriages are concerned. Akshay teams up with director Anees Baazme for this movie, together the duo have previously given us the blockbuster likes of 'Singh Is King' and 'Welcome'.

And with that, another innovative promotional gimmick hits the market. Of course, Akshay seems like quite the choice to be imparting such 'love vs shaadi gyan'! Been there, done that, and preaching what he's practiced hence!