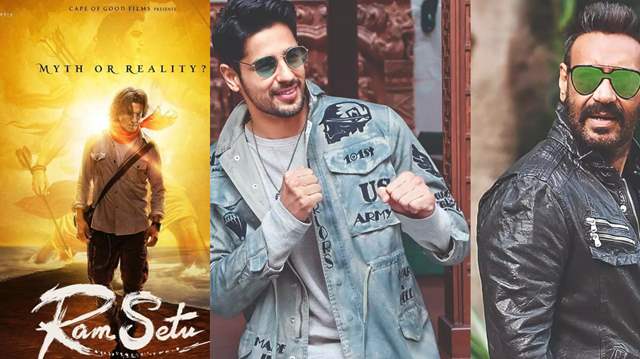 Ajay Devgn, who wowed audiences with his performance in Runway 34, is back with another intriguing film for them to witness. He will next be seen in Thank God and the film is being helmed by Indra Kumar.

The film is said to be a slice-of-life drama compelled by seemingly having a contemporary and relatable tale. Interestingly, Thank God will also star Sidharth Malhotra and Rakul Preet Singh. According to a recent update, the makers have finally settled on a release date for the film.

The Ajay, Siddharth and Rakul starrer is all set to lighten up your festival as it gears up for 2022 Diwali release. Thank God, which will most certainly tease your humorous nerves, while also delivering a wonderful message, will be Ajay's first collaboration with Sidharth and his third with Rakul after De De Pyaar De and Runway 34.

Now that the release date is out, it would be interesting to note that, Thank God and Ram Setu will have a box office clash. Ram Setu, directed by Abhishek Sharma, is an action-adventure drama starring Akshay Kumar, Jacqueline Fernandez and Nushratt Bharuccha that will be released on Diwali this year.

It will be exciting to see Ajay and Akshay square off at the box office. It should be noted that this is not Akshay's only box office clash this year. His much-talked-about family drama Raksha Bandhan, directed by Aanand L Rai and starring Bhumi Pednekar, will coincide with Aamir Khan and Kareena Kapoor Khan's Laal Singh Chaddha, a remake of the Tom Hanks-starrer Forrest Gump. Both films are scheduled to be released on August 11.

3 months ago Akshay Kumar's films will only fail from now on. He will take all the money and run off to Canada. Prithviraj was the biggest disaster of his career. Bollywood is doomed.

+ 14
3 months ago Akki is clashing with Aamir in August and for Diwali with Ajay/Sid! Not sure if its a good thing for his films