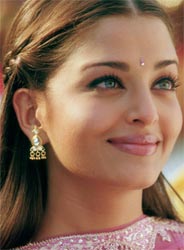 Featured Video
'Shankar had approached me previously to work with him, but it never materialised. Finally, everything landed in place and here we are working together after 10 years,' said Aishwarya on the sets of 'Ravan'.


Tamil superstar Rajinikant, who is playing the male lead in 'Endhiran', was also very keen to work with Aishwarya and had tried to sign her for his earlier ventures - 'Padaiyappa' and 'Chandramukhi', but the actress could not spare the dates.


Speaking about Ratnam's 'Ravan', in which she once again teams up with her husband Abhishek Bachchan, Aishwarya said: 'I don't want to reveal much about it. Working with Mani is always a delight. He is a man of perfection. I am lucky to act in his movies again and again.'


Aishwarya was earlier seen in Ratnam's 'Iruvar' and 'Guru', in which Abhishek was in the main lead.


While shooting for 'Ravan' in the jungles of Kerala, the entire cast and crew had a scary experience when an elephant ran amok and killed 51-year-old mahout Andavan.


The actors including Abhishek, Aishwarya, Vikram, Prabhu and Munna had to take shelter in a guest house.


According to sources, the film personalities spent the night in the forest guest house and survived on bread and eggs. After 12 hours of tension and waiting, the crew returned to their hotel.


Now the cast and crew of 'Ravan' has moved to Ooty where the remaining portions of the film will be shot.