View Profile
With Bollywood's over Rs 100 crores investment on Sanjay Dutt going for a toss, industry insiders were shocked and disappointed by the six-year rigorous imprisonment handed out to the actor.

Film-maker Subhash Ghai, who worked with Sanjay in Vidhata and Khalnayak, was in Vienna when the verdict w 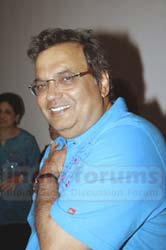 Featured Video
as given out under the Arms Act for illegal possession of an automatic AK-56 rifle in 1993, two months before the March 12 bomb blasts. "Sanju has been a family member to us. So you can imagine our grief. We still pray that god be kind to him, because he has been punished enough for the last 14 years. He has tried his best to be a good person and citizen."

Bollywood bad man Gulshan Grover was in a shock that Sanjay had been sent to jail once again after 12 years. "I had never expected such a verdict. I think Sanju has already suffered for what he did. He had been in custody even before. So I think the judiciary needs to revise the decision. After all he is a changed man. He can be an asset to the society."

Other artistes also rued the ruling on Tuesday. Arti Chabaria said: "It is a great loss to our industry because he was not only a good actor and but also a good human being. I will stand by Mr. Dutt, but nothing can be done now as the court's sentence has been given."

An emotional Rohit Roy went a step ahead to slam the court's decision as "too harsh". "I don't think even the most hardened criminals get such punishment. He (Sanjay) was reckless in his youth but tell me, who isn't? I guess he has already suffered for 14 years with the dagger hanging on his head. He doesn't deserve this." Rohit describes Sanjay as a "very sweet guy who has not changed one bit in the past 14 years".