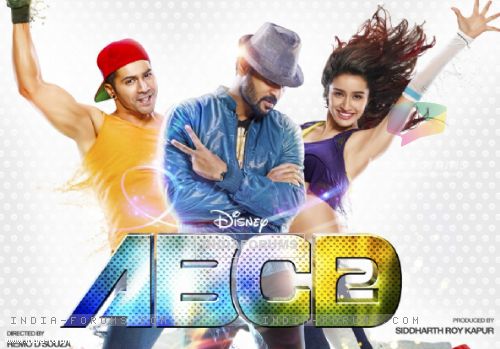 "ABCD 2" is motivational dance film with a tinge of patriotism thrown in.

Everyone makes mistakes in life, but "Life is all about the next step," sums up director Remo D'Souza. The film is inspired by the trials and tribulations of 'The Fictitous Group', a dance group from Nalasopara, a suburb in the outskirts of Mumbai.

"ABCD 2" showcases the journey of the Mumbai Stunners, a local dance group, from a television reality show to the World Starz - Hip Hop Competition, in Las Vegas.

Helmed by Suresh aka Suru (Varun Dhawan), the team is disqualified from the TV show on grounds of plagiarising the hip-hop dance of a renowned group from Philippines. Branded as "cheaters", scorned by everyone, the team disintegrates. It is only his childhood friends and co-dancers Vinnie (Shraddha Kapoor), Vernon, Raghu and Jack who stay back.

Dejected and low on self-esteem, a guilt-ridden Suresh learns about the World Hip-Hop Competition in Las Vegas and tries convincing his friends that participating in this competition is their only chance to win back their lost prestige.

A chance meeting with a brilliant dancer Vishnu Sir (Prabhudeva), revives his hopes. Since the original team has dispersed, Suresh along with his friends and Vishnu Sir conduct auditions to form a new team. Dharmesh from Baroda and Vinod, his deaf and mute friend, are selected. Realising their folly, some of the original teammates come back.

After qualifying the preliminary round in Bengaluru, the Mumbai Stunners are now 'Indian Stunners' as they land in Las Vegas to be a part of the finale.

The storyline is superficial. The plot, strewn with spectacular dance sequences, is formulaic and relatable. The script is flowing, but unimaginative. It offers no dramatic moments and the surprises are more of duds.

The film centres around dance and the director ensures that the dances; breaking, krumping, locking and popping are flamboyantly portrayed. In the bargain, his characters take a backseat. While most of the characters are two-dimensional, their emotional sub-plots are underdeveloped.

Humour along with melodrama, in equal measure, are perfunctory and those scenes drag. What keeps you glued are the dance pieces, which are well-choreographed and captured brilliantly. The skills of the dancers are sure to bowl you over.

Varun Dhawan as Suresh performs competently, displaying his dancing skills effectively, but it is Shraddha Kapoor, as Vinnie, who is the surprise package. With lithe and graceful dancing skills, she makes her mark as a dancer, for the first time ever. And how.

Lauren Gottleib as Olive, who comes as a substitute for Vinnie, is phenomenal as a dancer. Prabhudeva, as Vishnu Sir, is expectedly spectacular in his opening dance sequence. However, with his weak dialogue delivery and negligible emoting skills, he is not convincing in the emotional and drunken scenes.

Mounted on a magnificent scale, the visuals by cinematographer Vijay Arora are captivating, especially the ones in Las Vegas. Several frames are picture-perfect, showing his mastery over his craft.

The film is jazzy and vibrant, but drags in parts, specially the numerous dances, which were unwarranted. This makes the film seem like an unending collage of dance sequences, sans the emotional quotient. The last act plays the patriotic theme full throttle and gets the audience emotionally involved.

Anybody who remotely loves dancing, should watch "ABCD 2".

3 years ago It is a motivational dance film and it is very nice movie but Varun and Sharddha Kapoor's acting is amazing in the movie.