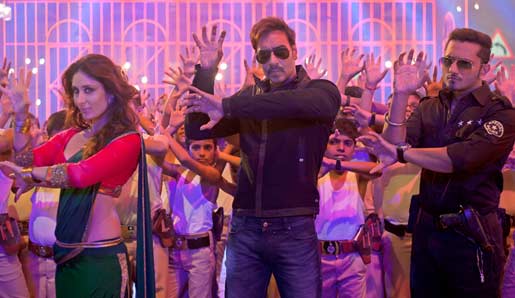 One of the most anticipated franchises of the year Singham Returns is all set to blow your mind with yet another surprise for its fans.

We all know that the numero uno rapper and musician Honey Singh has been roped in for a special song featuring Singham aka Ajay Devgn & Kareena Kapoor for Singham Returns on the famous iconic cult dialogue Aata Majhi Satakli , the song as expected by the makers has been appreciated by one and all and especially by the young kids who love the dialogue Aata Majhi Satakli!

The song features the film's lead actors Ajay Devgn and Kareena Kapoor . Though Honey Singh has worked with Ajay Devgn before in Son of Sardaar, this was the first time he teamed up with Kareena Kapoor.

Buzz is that the video has crossed over 1 million views in 24 hrs!! The track is catchy, groovy and a great party number,the song is synonym to Singham's franchise-that is its iconic cult dialogue, it is surely climbing the char-busters! This is the first time a promotional song has garnered so many views in less than 24 hours of its release, and has taken this much anticipated franchise to another level!

This promotional song is a stylish track which has been shot in a span of 3 days on a very grand scale with 100 kids and is choreographed by National Award winning choreographer Ganesh Acharya.

Get ready to groove to the new version of 'Aata Majhi Satakli'!!