The most anticipated comedy of the summer, Shortkut, has been in the news for some time thanks to leading lady Amrita Rao's sexy makeover. The demure bride-to-be in Vivaah dons an ultra-glam avtaar in Anil Kapoor's next production after Gandhi - My Father.
Amrita shocked us when she revealed that Shortkut was an "A" film. Shortkut? An adults' film? To which she laughed, "I don't know if it's occurred to you but all the pillars of Shortkut have names beginning with the alphabet 'A'! Anil Kapoor is our Producer, Anees Bazmee has written the script, and it stars Arshad, Akshaye and myself! So isn't it a straight 'A' film?"
Let's hope this laugh-out-loud comedy is an 'A' at the box office as well! Shortkut releases worldwide on July 10th by Indian Films- Studio18.
Featured Video 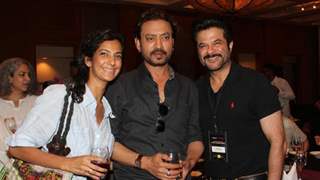