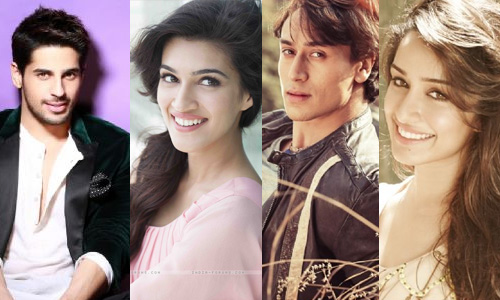 The year has been full of surprises at the box office. While the Khans have continued to give numbers, it is the younger lot who have proved their mettle and set the cash registers ringing.

While Sidharth Malhotra surprised the industry by giving an opening of 16.5cr at the box office with Ek Villian, Arjun Kapoor opened 2 States at 12cr. Varun Dhawan's films were loved and his acting appreciated by audiences.

Tiger Shroff made an impressive debut with Heropanti where audiences flocked into catch the new star in the making. The film opened at 6.5cr which is huge for a debutant actor.

The year has witnessed the young actors flourishing film after film.

Prabhat Choudhary, head of a leading communication agency gives an insight on the paradigm shift "Almost 80 percent of India's movie goers today are youngsters and so it is they who make or break an actor. It is important to impress them. And the kinds of films these young breed of actors are selecting are stories of the youth and for the youth."

"It has been proved that the younger stars of Bollywood can deliver big time at the box office." he further adds

The change has also come about because the young talent is ready to experiment. They are not afraid to try different things. Like for example Sidharth Malhotra started the year by playing the boy next door in Hasee Toh Phasee and then audiences discovered an aggressive, grungy side of him in Ek Villian.

These young actors have delivered hits at the box office and audiences are heading to theatres to not only watch the three Khans but also the young guns. These were numbers that belonged to the big guys until last year but these young actors have proved in 2014 that they are here to stay. Big banners and established directors are betting on these guys and are readily giving them scripts for solo lead. The general level of faith in the young talent has paid off.

One can finally say that these young guys have arrived! 2014 definitely belongs to this young clan.