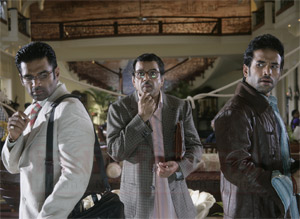 This guy comes into the comedy quite early to serve Sameera Reddy, a car showroom owner, a notice. He smiles and delivers his murderous missive, turns around, frowns and vanishes.

The thing about Ashwini Dheer's flaky but funny farce is that it has accomplished comic actors in the smallest of parts. Watch out for the seasoned Marathi actress who plays Tusshar's mother. All she wishes for her son is that he excels in his work, namely killing people.

She sends him off on his first contract-killing mission in Pondicherry (where most of the knock-kneed, but never hackneyed action unfolds). Tusshar ends up at the doorstep of the wrong person - a loud Tamilian scrambled-brained lingerie designer. Esha Deol is cute and loud as the designer.

Lingerie, or 'kachcha-banyan', as Paresh Rawal insists on calling them plays a big part in covering up the broadly exposed bases in this situational comedies, where the best moments are those that actors take over from the screenwriter and make their own.

Mukesh Tiwari displays an unusual penchant for parody (forget the unfunny 'Buddha Mar Gaya') adding an extra 's' to every English word, is like Rakhi Sawant gone wrong. Tiwari's sidekicks have their own subplots. One of them makes bombs that never go off on time.

Luckily, '123' gets its timing right most of the time. It's a war of nerves between the writer and audience, as the one tries to outpace the other. Eventually, the audience does get tired of watching three guys with the same name, Laxmi Narayan, getting mixed up in situations where spoken words give nothing, and yet everything away.

But our fatigue is slackened by the unslackened physical energy that the characters bring to the minutest of moments. Ashwini Dheer comes from the television sitcom culture.

Nowhere does his framing or shots give away his cramped antecedents. He enjoys the large open spaces that his crowded cast populates with parodic panache, pouncing on the preposterousness in the plot with famished energy.

The cast is uniformly in sync with the director's vision, not allowing the shards of farce to be fr
Featured Video 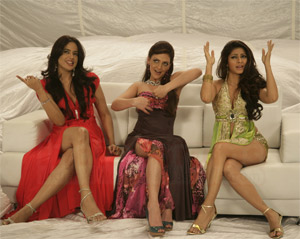 ittered away unused. The smallest of cast member knows the job on hand.

But Suniel Shetty gets as far away from his macho image as humanly possible as the timid and punctual Laxmi Narayan on the run with a reined-in enthusiasm. 'We've seen Suniel do comedy the before. But he was never so straight-faced and sharp. He is a surprise.'

Tusshar Kapoor as Mama's pet out to make his first kill is extremely accomplished. He labours over the loud comedy and gets the volume right. Paresh Rawal is selling lingerie with uninhibited pride and is not the outright winner as he usually is in these comedies.

Has Paresh become complacent? Or have Suniel, Tusshar and company got better at the funny stuff? If only director Dheer had avoided the excessive crudity especially in Suniel's prolonged sequence in the public loo with the cheesy hit man.

'Main nahin pukdunga,' he protests in panic as the other actor (another small-time scene stealer in this festival of interesting actors) reaches inside his pants. Panic-attacks dominate lives of these flustered characters.

These lovable losers try to sell lingerie and cars, while the director repackages the Shakespearean comedy of errors in a new autopilot manoeuvre that doesn't quite have you holding your sides. But chuckles don't stop.

The shortest role in the history of the comic farce goes to Upen Patel and Tanissha. They come in with a song and go out with a bang. In-between, they lose their grip over the giggle trip. 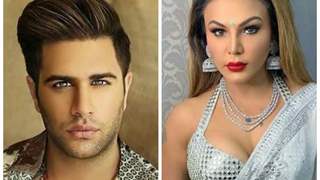