After years of demurral, Bollywood's glamour icon of yesteryears Zeenat Aman has finally said yes to television. She will be a judge on Ekta Kapoor's reality show 'Kaun Jeetega Bollywood Ka Ticket' to be aired on 9X.

'Ekta has been so sweet. I've watched her grow up in front of me. I'm happy that my first foray into television is for her, though I must admit I don't watch much TV,' Zeenat told IANS.

'But every time I'd run into Ekta's mom - and that is once a year - she'd tell me to please let them know when I'm ready for television.'

The former beauty queen, who has starred in many memorable Bollywood hits, has been offered a number of soaps in the past, which she declined to do.

'TV does take a lot of time. Very honestly, I wasn't wil 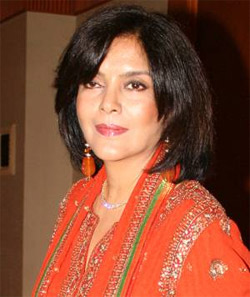 Featured Video
ling to invest the amount of time it required. And my priority has always been my family. But this time I was approached with such enthusiasm, I just couldn't say no.'

She admits 'Kaun Jeetega...' requires a more pronounced level of commitment than the average reality show.

'This is a reality show about discovering new talent and needs to be treated with special care. I'm willing to go that extra mile for it. To be able to find fresh talent for our industry is wonderful.

'And Ekta has gone into it with such passion - just like in everything she does. I'm so delighted to be on board with her,' said the actress.

'There was no plan, thought or conscious strategy to do or to be anything. I just did what I wanted to.'

At the moment both of Zeenat's sons, who were studying away from home, are back with her.

'And to me, having my children around is the most important thing in life. I lead a very contented and private life. I've my sons, dog and lots of greenery surrounding me. What more could I ask for?

'Honestly, I'm treating this project as a one-off thing. I'm not looking ahead at what I'd be doing or not doing. At the moment I'm just happy to be focusing on 'Kaun Jeetega Bollywood Ka Ticket'. As for soaps, maybe yes. I've never said no to anything.'

'Basically it'd take up no more than a week. I hope to enjoy it. It provides a platform for young people. The winners will be given a chance to work in a film produced by Ekta.

'Today there're such platforms for hopefuls. When I had entered, the opportunities for newcomers were so limited,' said the actress who was seen in such memorable hits like 'Yaadon Ki Baraat', 'Don', 'Qurbani' and 'Satyam Shivam Sundaram'.

Zeenat is looking forward to meeting up with her old colleague Shabana Azmi on the show.

'Yes, she's a colleague and we did a film together: 'Ashanti' - Shabana, Parveen Babi and I - it was loads of fun.'

On veteran actor Dev Anand's autobiography, which has pointed references to his friendship with her, Zeenat answers with consummate clarity.

'Dev saab is a senior person, and someone I respect very much. Due to him I had my first success 'Hare Rama Hare Krishna'. And subsequently I shared a long and fruitful association with his banner Navketan.

'However, two different individuals have differing perspectives of the same situation. I leave it at that.'