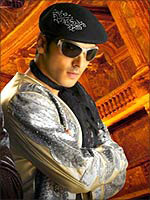 The release date of ‘Yuvvraaj’ also marks the 3rd marriage anniversary of actor Zayed Khan and his wife Malaika. The couple plans to host an intimate party on the release day no matter what is the fate of the movie.

Talking about his role in ‘Yuvvraaj’, the actor plays the character Danish who is arrogant, self-absorbed and megalo-maniac. However, the actor in reality does not posses any of these traits but share a bit with Danish when it comes to his handsome, charming, flamboyant part. Rest all is what the director Subash Ghai has set for the characterization.

Danish does not know anything better because he never taught about what is ethical and what is not. He is not greedy but wants what he owes and make sure that he gets it too. He knows how to fight for his rights.
The promos have seen that Anil Kapoor is kissing the actor on his cheek that was a terrible experience for Zayed because Anil’s moustache kept poking his cheek and he hated it.

Recently ‘Dostana’ expressed love for friendship, how about brothers sharing their love?