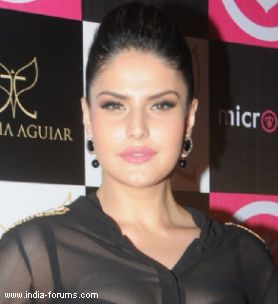 Actress Zarine Khan, who was last seen in the Hindi film "Housefull 2" in 2012, says she is taking her time in selecting projects as she wants to do some good work.

"I am taking my time and doing good work," Zarine, who made her Bollywood debut with Salman Khan starrer "Veer", said at the launch of designer Amy Billimoria's collection here.

"You (audience) will soon see me on the screen. You have not seen me in Hindi film for long that does not mean I am not doing any film. Recently, my Punjabi film has released, which has done good business," she said.

"And talking about my Hindi films, one film will release soon and will begin with another soon," she added.

Zarine's upcoming Hindi projects include "The Legend of Michael Mishra" and "Amar Must Die".