'I am a very big Madhuri fan. Working with her is a dream come true. For me she was larger than life and I never thought she would be like normal human beings. I thought she was a diva,' Kunal told IANS.

'It took me really long to come to terms with the fact that I was actually working with her. I had to act off-screen, in front of her, to hide how much I liked her.'

Kunal, who plays the role of a small town goon in the film, said after working with her, he has become even a bigger admirer of the actress. 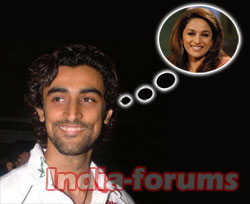 'After spending time with her I realised how grounded and genuine she is. Now I am a bigger fan of Madhuri - the person.

'I am a self-obsessed actor who loves to see himself on the silver screen. But now the actor in me has taken a backseat and the fan has come in front. I am so excited to see her on screen.'

Kunal started his stint in Bollywood with 'Meenaxi' and has been a part of Bollywood biggies like 'Rang De Basanti' and 'Laaga Chunari Mein Daag'.

He is still waiting for a solo hit but is upbeat about his career.

'When I did 'Rang De...' everybody said it is Aamir's film and when I picked up 'Laaga Chunari...' they said its Rani's movie. However, they all worked for me.

'And being just five films old in Bollywood I feel I am lucky to have worked with some of the industry's superstars and big banners like Yash Raj.'

Commenting about his steady look, the long-haired, bearded Kunal said: 'I am waiting for some director to say 'I want to see you bald or cut it short'. They just say 'love your look, keep it the same'.'