Ekta Kapoor and Karan Johar are not the only ones to believe in the power of the K factor. Following with the trend is K. Shailendra, one of the contestants on K for Kishore, whose real name is Sonu. 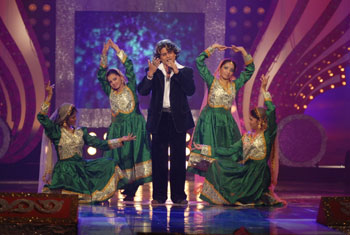 Featured Video
But since there is already a Sonu Nigam reigning supreme in the music scene, the singer who bears the same name as the late lyricist Shailendra decided to be different. A die-hard fan of Kishore Kumar, this talented young man from Jhansi has been struggling for a foothold in the Mumbai music industry for the last eight years. Success came to him only after he decided to add a K before his name. He got his first break as a singer, thanks to Suneil Shetty. He sang his first song in Ajay Jadeja starrer Khel. His album Aapko Dekhkar has also released after that. Shailendra believes it is Kishore Kumar's blessing that is working for him!

Will K. Shailendra's luck hold him in goos stead in the show K for Kishore?… Watch him perform on Hazaar Rahein Mud ke Dekhi... this Saturday, March 1 at 9.00 p.m. only on Sony Entertainment Television.

+ 3
14 years ago its K.K the famous singer love all his song