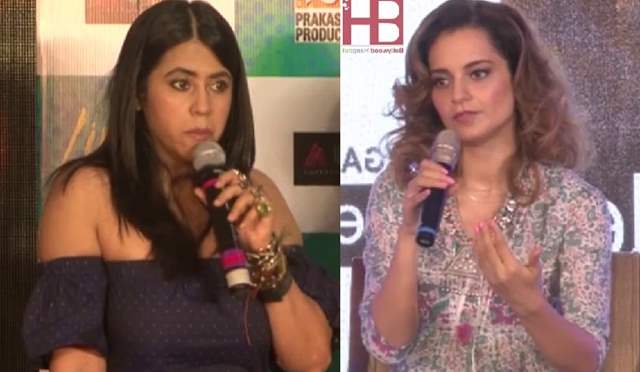 As reported earlier, at the Wakhra Swag song launch, the lead actress of Judgemental Hai Kya, Kangana Ranaut misbehaved with a journalist named Justin Rao. A major argument broke out between Kangana and the journalist. The emcee of the event tried to intervene and he too was shoed away by the other journalists present at the event.

Here's what happened: Fight Broke out after Kangana Misbehaved with a Journalist, Ekta Kapoor had to Intervene

As known to all, in the days gone by, Kangana has been locking horns with the actors and the directors of the industry, and now she got in a public tiff with a member of media, so now, the media personnel have decided to give it back to the actress.

Reportedly, the media fraternity is standing in solidarity against Kangana’s bullying and will be meeting the producer of the film Ekta Kapoor to ask Kangana to apologize. Senior journalists will have a meet today to carry forward this agenda. They want Ekta to take a stand against Kangana’s behaviour and want the actress to give out a public apology.

If Kangana disagrees to do so then the media will boycott Judgemental Hai Kya movie promotions.

So, the big question remains, will Ekta make Kangana apologize or bear the brunt of her arrogance? What do you think? Share your views in the comment section below.