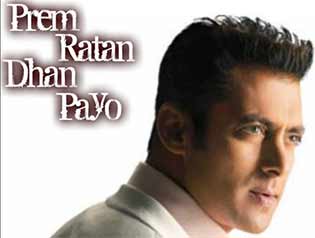 Salman Khan says shooting Sooraj Barjatya's "Prem Ratan Dhan Payo" is the toughest film he is doing in so many years as the role requires him to be as "pure" as he was when he featured as Prem in the filmmaker's "Hum Saath Saath Hain".

"It's ('Prem...') the most difficult film I am doing in a very, very long time because it's been 13 years since I have worked with Sooraj. I have changed so much, I'm not that pure person anymore. I have seen a lot more (sic)," the 47-year-old said here Tuesday in an interview.

To be the same Prem again, Salman had to unlearn everything he has learnt in the past years with films like "Wanted (1983)", "Dabangg" and "Bodyguard".

"It is very difficult for me to become that Prem once again. I am having all my films put together and this film separately, just to unlearn everything I have learnt so far," Salman said.

"Till that time I don't get that Prem, I don't feel it here, it is not going to show on my face. It is actually once again getting me back to what I used to be," he added.

However, Salman says that Barjatya carries the same innocence.

"Sooraj is exactly the same. That innocence that Sooraj had when he wrote 'Maine Pyar Kiya' at the age of 17...he still has that," added the 47-year-old.

"Prem Ratan Dhan Payo" stars Sonam Kapoor opposite Salman and is slated for release in 2015.