If you thought Smriti Irani's re-entry (scheduled for the coming Thursday episode) in Kyunki Saas Bhi Kabhie Bahu Thi has upset Gautami Kapoor who's playing Tulsi, then think again. Says Gautami, “When I was offered to play Tulsi, I always knew Smriti was going to come back. Mine was supposed to be a cameo which then extended into almost a year. I only didn't know when and how she will enter the show again. I guess Smriti's re-entry was big news so it was only natural, Ekta and the production guys kept it under wraps”. 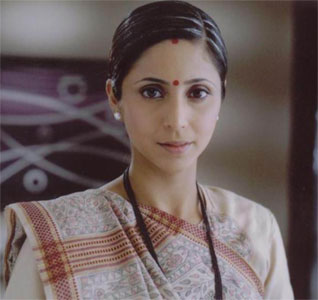 Featured Video
Just before Ekta Kapoor and Smriti Irani held a press conference, Gautami claims to have got to know about her comeback. “I was informed about the press conference. It wasn't as if I was shocked. I was always in the loop”, justifies the actress. Gautami feels media should not read too much into this as she says Kyunki is Ekta and Smriti's baby. “Come on, they have been running the show for so long and so successfully, any decision that Ekta takes in the interest of the show can’t be questioned. We can’t take away their success from them," says Ram Kapoor's real wife.

So will she continue to be Tulsi? “Well, there is an interesting storyline coming up with both Smriti and me but obviously, I can’t be telling you all. I can say I will be part of Kyunki for another two months”, confides Gautami.

Finally, has she met Smriti? Did she ask for her feedback after she started playing Tulsi? “I met Smriti during the Global TV awards. We were cordial with each other, but don’t make us sound like we are bitter enemies or something. As for feedback, I never felt the need to do that. I can neither do those things for the media nor am interested in the politics of TV. I was given a challenge, I took it up because putting on Tulsi's shoes and getting accepted by the viewers is a huge responsibility. I am doing a job and I know I am doing it to the best of my ability. Why would I need somebody’s feedback? In any case, why compare a 10-month stint with a seven-year innings?”, questions Gautami before signing off.

somebody please ask her to wear gowns rather than frocks in award functions!

vrtanneru 14 years ago Smriti's Mere Apne is doing Good..I like it

14 years ago awww....i really liked Gautami and I'm not happy with her being replaced! I'm gonna miss her :(!

14 years ago I thought Gautami was a permanent replacement and Smitti was going to concentrate in her production house.

14 years ago Cricket is not the right comparision here.Sports,music and business is my field of interest.Empty vessels make noise.If not as a man of the series or breaking world record's in what ever role the players play as batsman or bowler or a wicket keeper or an all-rounder.One could have been atleast man of the match which is awared for the best bowler/bats man/an allrounder/wicket keeper/fielder saving runs or getting few catches whoever played best in one day innings or test matches but who played best on that day is awarded man of the match be it test match or one day innings.Cricket is not the right comparision on the whole.I would rather say a duck-out/run-out,sheer bad luck even if it was for the players who have breaked records or new players or with minimum number of matches played earlier.

Without knowing cricket in detial or even to extent one must have not brought cricket into comparision or to make comment on it is wrong and is really uncalled for..

14 years ago one thing i cant understand is that how will this happen?? just like that....like when kyunki start it will say that gautami will be now replaced by smriti ect...