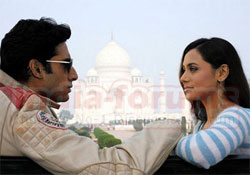 Mumbai, Oct 13 (IANS) Putting aside rumours about Rani Mukerji being ostracised by the Bachchan camp, Abhishek Bachchan says they are still good friends and that he would love to work with her again.

'Who says Rani and I are at loggerheads? Such talk hasn't affected our friendship at all,' Abhishek told IANS on phone from Namibia where he's shooting for Goldie Behl's 'Drona'.

'Strangely we've played husband and wife in most of our films together, including 'Hum Tum', where I came in, got married to her and was ousted from the script. Rani is a superb actor and we've done some truly challenging work together. You have to see her in 'Laaga Chunari Mein Daag'. I hope to do many more films with her.'

The presence of his mother in the film has made the movie extra special for him, says Abhishek.

'I got to work with mom (Jaya). I had done a cameo in a Bengali film as her son. Mom and Pa are two different actors and human beings; they're both unique actors. It's
Featured Video 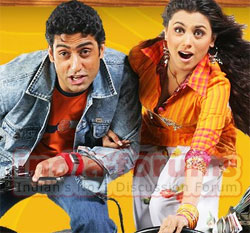 a sheer pleasure to share screen space with mom. I hope to do as many films with her as I've done with Pa.'

Ask him what the main difference is in working with his two parents, and Abhishek ponders, 'In-between shots Pa and I chill out, have fun. Ma is constantly mothering and fussing over me when the camera is switched off. Though I pretend not to like it, I secretly love it.'

There was big-time bonding on the sets with co-star Kunal Kapoor.

'Kunal and I grew up together. He belongs to the same Juhu circle that I do. He's a terrific guy and an even better actor. His performance in our new film will surprise a lot of people. I also admire Konkona Sen Sharma with whom I worked for the first time in the film. She's great fun.'

As for director Pradeep Sarkar, 'I did a number of ads with him before I finally got to be in a feature film with him. His zest for his work is unparalleled. I saw no difference in his enthusiasm level on the sets of our feature film. I want to work with him again,' Abhishek says.