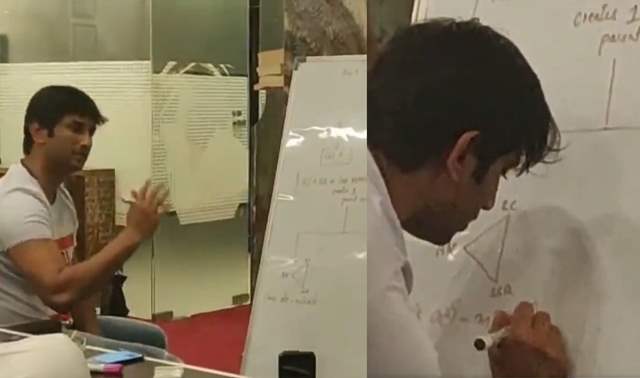 Sushant Singh Rajput's death mystery is getting twisted by the day. It's already been more then three months that the 34-year-old actor left for heavenly abode following a tragic demise and it's still unclear whether it was a suicide or a homicide.

While thorough investigations are on and both, CBI (Central Bureau of Investigation) and NCB (Narcotics Control Bureau) are leaving no stone unturned to investigate from every angle, the actual cause of his death is still unknow.

But, there is one good news, the AIIMS forensic report is expected soon and with that the cause of his death too might be known soon.

Now, an unseen video has surfaced wherein the late actor can be seen chalking out his future plans on a white board. In the background his girlfriend and actress Rhea Chakraborty can be seen speaking to him while he draws various diagrams.

Sushant Singh Rajput has been known for his work and his exceptional mind. In this video, Sushant is seen to be drawing on the board and mentions some initials. While RC can be linked to Rhea Chakraborty, the late actor also mentions the initials AK, and is discussing AK’s untold tale.

AK is yet not known and has once again given the suspicion of another mystery man/woman being involved. The agencies are also looking into it in order to find out as to what was on Sushant’s mind or the circumstances that led to his death.