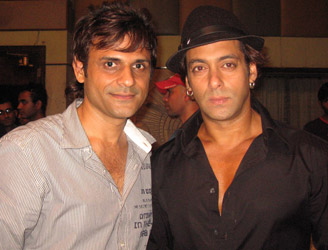 Director Summit Dutt may be the man behind the videos of some of the biggest Indian artistes like Asha Bhosle, Harry Anand, Daler Mehndi, Gurdas Maan, Jasbir Jassi among others, but his work impressed Salman Khan so much during the making of the Hello Party Mix music video that the actor actually took off his shirt to give the audiences a view of his abs!

Grins Summit at the question, "I guess when Salman bhai becomes happy, he takes off his shirt."
Getting serious, he adds, "Salman shot with us for two hours but the way he changed expressions and gave us moods for the shoot, it was amazing. I like making my artistes comfortable and that is what I did with Salman. Once he was comfortable, he actually enjoyed himself and had a ball. It was fun shooting him and I think it was my good fortune that the video is received so well by the youth."
Talking of how each frame at times has so many layers, Summit shares that "As the frames have at times over 110 layers with each frame positioned in a particular way, it is not easy for any artiste to visualize the final product. Salman bhai had faith in me as he has seen my work but he was a jolly good sport."
Considering that Sallu's abs seem to be giving comeptition to rnold Schwarzenegger in the video, one thinks the actor's trust was worth its while this time!
Featured Video