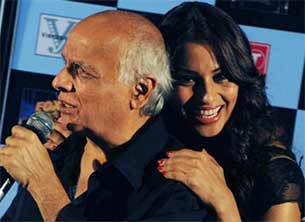 Actress Bipasha Basu is happy with filmmaker Mahesh Bhatt's recent gesture and says his surprise visit on the first day of shoot of her upcoming film "Alone" was a "tremendous morale booster" for her and the film's team.

"It is always a pleasure to be in Bhatt saab's presence. He is someone I respect a lot and I am truly fond of him. His coming all the way to bless us at the start of the film, before we took our first shot, was a great gesture on his side and tremendous morale booster for me, Bhushan and the entire team," she told IANS.

Produced under the banner of Panorama Studios, the film is the Bollywood remake of the Thai horror film "Alone".