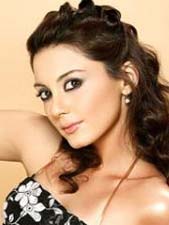 There is a lot of buzz in the town that actress Minissha Lamba has undergone knife for her nose job. Guys, does it bother you?


If this bothers you, get informed that a source near to her denies it. Have these actors ever agreed for getting under knives? So how can we expect a positive reply this time?


Deny it or accept it, this hardly matters. The matter of concern is that the actress is been roped for a new film by Shyam Benegal. Whose he? A prolific Indian director and screenwriter. His recent venture ‘Welcome to Sajjanpur’ was a success. The movie starred actors Amrita Rao and Shreyas Talpade.


Minissha over Amrita. Do you think it’s a wise choice? This entire headache belongs to Mr.Benegal, our interest is to know what Minissha will be doing in the film? Of course you can’t expect her donning a ‘bikini’ in a Benegal film. So, what can be expected? A look of a simpleton girl from village. The film also stars Boman Irani in double role.


It is tentatively named as ‘Abba ka Kuan’ and its shooting is slated to start by next month.
Featured Video