Divya's has been given a total 'Gypsy' look and essays the role of a local hottie called 'Jalebi' who uses the typical 'Mardoon ki Bhaasha'!

And we hear that her trainers for the same were none other than the whole 'filmi' cast and Rakeysh Omprakash Mehra himself who used to teach the actress 'Gaalis' and the tone of voice!!

Apparently, the sweet and bubbly actress has spoken words that she has never even heard let alone used in her life!

"At first I was very apprehensive about the whole thing but then I just got used to it, I felt like one of the guys. I remember when I had to deliver my first dialogue the cameraman had this weird expression on his face, I had gotten so scared but then suddenly everyone broke into an applause which was very flattering. Rakyesh and everyone have been very supportive and encouraging throughout" says Divya.

Well, looks like Divya did have some 'foul' learning to do!! 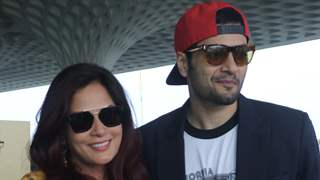 Richa Chadha & Ali Fazal are off to Delhi for their pre-wedding ...