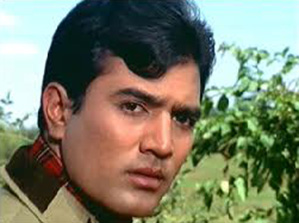 They looked up to Rajesh Khanna as an "epitome of romance", "a charmer" and as "an evergreen" hero. His death has come as a shock for his legion of female fans who mourn his death and say they will miss their "first hero".

It is a known fact that the Bollywood's first superstar, who has left behind a rich legacy, enjoyed a huge female following and Veena Mehra is one of the crazy ones.

Recalling her younger days, Pune-based Veena said she was so fond of the star that she used to collect his photos from newspapers and magazines.

"I was a die-hard fan of Rajesh Khanna. As a young girl, I had a huge pile of his photos kept with me. There is hardly any movie of Rajesh Khanna that I have not seen," Veena told IANS.

Rajesh Khanna's name was enough to spark a frenzy among his female fans. Girls used to follow his car chanting his name and leave lipstick marks on it.

"I remember my friend was one of the million girls, who wrote love letters to Rajesh Khanna. What a phenomenon he was. He will be missed," Veena added.

The craze for the uniformed men was started by Rajesh Khanna after he played an air force officer in 1969 blockbuster "Aradhana". His looks in the film had girls swooning over him and confirming this actress Celina Jaitly tweeted: "My mother tells me that Rajesh Khanna in air force uniform was an epitome of ultimate man in the 1970s. All girls were crazy after him."

Fondly called Kaka, Rajesh Khanna started his career with the 1966 film "Akhari Khat" and went on to give hit films like "Aradhana", "Kati Patang", "Anand" and "Amar Prem". Thanks to his romantic films, he became a superstar in just a few years.

He was the one who made jeans, kurta and mojaris a style statement all across, recalls Renu Sharma, a boutique owner.

"Rajesh Khanna was an epitome of romance. His face reflected romance. I have seen young girls going gaga over him. His style was very different from everyone else. All his songs were superhits and still loved by the younger generation. He is the one who made jeans and kurtas accompanied by mojaris a style statement," she said.

Gurgaon-based Renu Rekhi, a housewife, remembers him as an evergreen hero and says that for her romance meant Rajesh Khanna.

"For me, he was the ultimate romantic and evergreen hero. I loved his style, his 'adayein' and his aura. We will miss him badly," she said.

Delhi-based Sushma Gaur, also a housewife, echoes similar views and says she is still crazy about him and wouldn't miss any of his movies on TV.

"He completely suited the kind of roles that he was given to play. He was the ultimate romantic hero. I loved him in 'Anand'. The way he portrayed the character of Anand was terrific. He has inspired many people. I still watch his movies on television," said Gaur.

None of the actors of today's generation have charm like him, rues Indu Khurana, another Rajesh Khanna fan.

"That era can never come back. None of the actors today have a charm like him and they would never have a fan following like him. He was evergreen and will always be remembered in our hearts," said Khurana.

Rajesh Khanna made a superb on-screen pairing with Sharmila Tagore in films like "Aradhana", "Amar Prem" and with Mumtaz in "Bandhan" and "Do Raaste".

Ghaziabad-based Madhu Singh feels no one will ever be able to replicate the magic that Mumtaz and Rajesh Khanna created on screen.

"For me, Rajesh Khanna enjoys biggest possible fan following and I just loved his chemistry with Mumtaz," said Singh.

On Return to TV, Ellen Addresses 'Toxic Workplace ...
6 minutes ago

Kaveri Priyam on Being Disappointed With 'Yeh Rishtey Hai ...
16 minutes ago