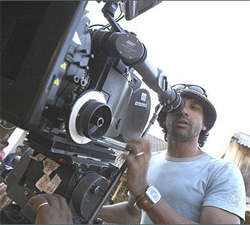 After making, his acting debut in ‘Rock On’ Farhan is all, set for the direction of his new project ‘Voice from the Sky’.
It is a periodic film with a setting of 1905, Kolkata. It is based on evolution of telecommunication system. The movie is about a child and telephone emerged as a new means of communication. It’s like a fairy-tale.
Don’t get carried away by the title, it’s a Hindi film and will be dubbed in English too. Talking about the star cast so Farhan has approached Irfaan Khan, Saif Ali Khan but finally, it’s Akshay Khanna who bags the role and for female lead  is still to be finalized.
Incidentally, this is a story, which Farhan had in mind for a long time but feels that now is the right time for such a film with the multiplex culture offering filmmakers to experiment with a variety of off-beat stories. Farhan dedicates this film to his mom.
Well this is not the end , sequel to ‘Don’ is also in the pipeline and once again SRK will  lead the star cast.
Featured Video