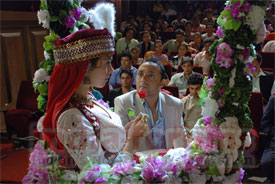 The company has fortified their plans by leaps and bounds and has announced five new projects to be released by the end of the year 2008.

The David Dhawan directed film will star Govinda and Akshaye Khanna, whereas the film directed by Priyadarshan will have box office superstar Akshay Kumar.

According to head honcho Ratan Jain, Venus Films, "Yes, we have big plans for our banner, we are coming back in movie production in a big way this year. And by the end of the year 2008 some of the above projects would be completed". -(SAMPURN)