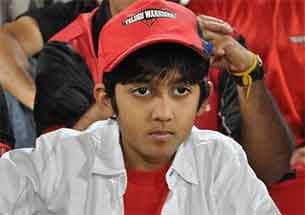 Ever since actor Venkatesh's son Arjun Daggubati was recently spotted at the launch of Telugu remake of "OMG! Oh My God" titled "Gopala Gopala", there have been rumours that he will be playing the actor's son in the movie.

"Arjun will be playing Venkatesh's son the film. It's a cameo but the duo has a few scenes together and it's sure going to catch the attention of the audiences. It was the director's idea to cast Arjun, and Venkatesh didn't mind because he would be acting with him," a source from the film's unit told IANS.

Venkatesh will be reprising the role of Paresh Rawal from the original, while Shriya Saran will be seen playing his wife on screen.

Actor-politician Pawan Kalyan will be seen in the role of modern-day Lord Krishna, which was originally played Akshay Kumar.

The film, which is jointly produced by Suresh Productions and Sharath Marar, is being directed by Kishore Kumar Pardasany.