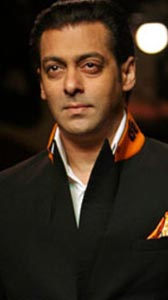 Salman Khan says period dramas usually give the impression that people in past eras never used to laugh, but promises that his new movie 'Veer' will have its light moments.

'We haven't followed the regular format. This has emotion, drama and comedy unlike other period films, which always casts an impression that no one used to laugh in those days,' Salman told IANS in an interview.

'The language has undergone a huge change. The dialogues are in contemporary language but would show that people of that time used to speak and behave like this,' he added.

'Veer', slated to release Jan 22, is a story of bravery, treachery and love. The story revolves around the 18th century Pindaris who preferred death to dishonour and fought to their last breath to save their land. Salman plays the lead role.

Throwing light on how his co-star Zarine Khan joined the cast, Salman said: 'The film is of a different genre, so we needed a young fresh look. More than that we needed somebody with a yesteryear look. How our grandmothers and great grandmothers used to look, we needed someone like them.

'Just two weeks were left to start the film and we didn't have anyone who would fit the role. We were searching left, right and centre and met her by coincidence on the set of Subhash Ghai's 'Yuvvraaj'.'

Salman denies any resemblance between Zarine and his girlfriend Katrina Kaif.

'Except being fair and having a sharp nose, I don't see any similarity between them. Give god that credit for not making two people identical,' said Salman.

The film's story has been written by Salman himself and while scripting it he was scared whether his father Salim Khan, a noted writer, would approve. 'I showed the story to my father and the biggest fear was what is he going to say. But he said it's a good story.'

When asked why he chose to make a period film now, he said, 'I had written the story 20 years ago but at that time it wasn't possible to make the film. I thought now is the right time to make it, so I did.'

This is Salman's second film as a scriptwriter. His first was the 1990 movie 'Baghi' and there is a common thread running through both the scripts - the father-son relationship.

' 'Baghi' showed a good relationship between a father and son, 'Veer' does that too. I believe that father and son should be the best of friends. Today, my father and me chat, drink and chill out together.

'But if I cross my line, I run away. I stay outdoor for two months. That's the chemistry they should share. The respect should also be there,' said Salman who claims that he could be a good father.

The actor has been in the industry for more than two decades and has played a variety of roles, worked in various genres and sported different looks.

Asked if there was anything particular he looked forward to as an actor, he said, 'No yaar. I do whatever comes my way.'